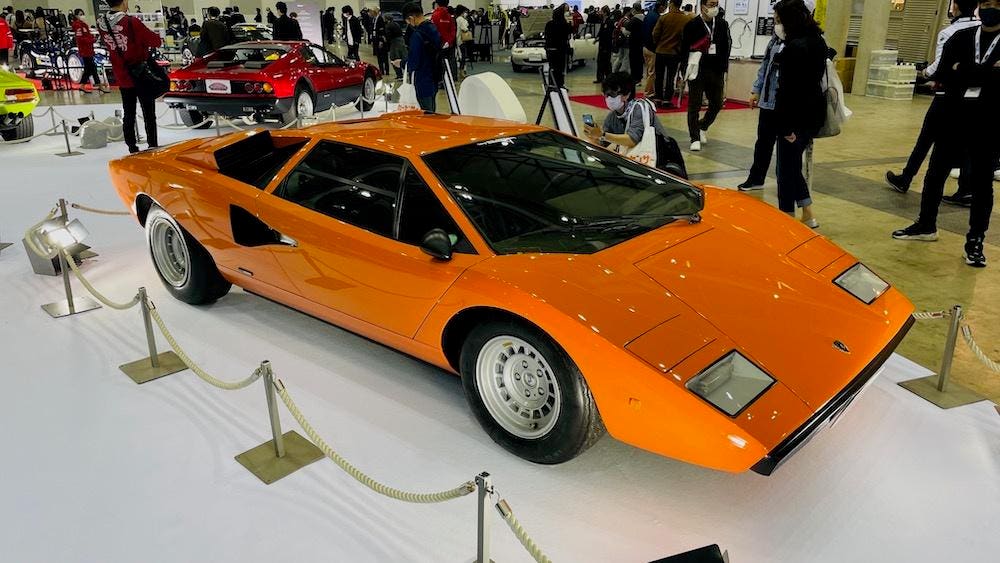 A legendary 1974 Lamborghini Countach takes on the latest McLaren Artura hybrid supercar, as a 1967 Toyota 2000GT peers across the hall from an all-new Nissan Z and an electric Hyundai Ioniq 5. This is a motor show where classic meets modern in the rawest sense of the word. Now in its seventh year, the Automobile Council event (held April 15-17) is an assortment of automotive delights spanning almost 100 years. Held at the massive Makuhari Messe complex about 30 minutes east of Tokyo, this rare event brings together the automotive genre past, present and future.

It’s the only event in Japan, and one of the few in the world, to feature a combination of automakers launching new models, while dealers and owners display some of the most legendary supercars of all time.

To find out how this event came about, I asked co-organizer and classic car enthusiast Masafumi Seki for a brief explanation. “Simply put, we started this event to create a new style of car culture in Japan. To achieve this goal, we felt it was necessary to understand the origins of modern cars. To have this knowledge and interest when you driving new or classic cars allows you to enjoy it more,” he says.

“Europe and the United States have each created their own car culture over the last century, but here in Japan, a country that has focused heavily on making new cars since the late 1960s, I think that this type of car culture is somewhat backward or should we say underdeveloped by international standards. I know what he means. Italy has its prestigious Concorso d’Eleganza Villa d’Este, the Kingdom United Kingdom has its Goodwood Festival of Speed ​​and the United States holds the exotic Pebble Beach Concours d’Elegance event among many others every year.Japan has its own particular style of motoring culture which includes sports cars turbocharged and “drift” cars and “itasha” cars that are heavily decorated with manga or anime characters. It is this type of culture that influenced the creators of the Fast and Furious movie franchise, and yes, that culture resonated with a large international audience of young fans who yearned for reasonably priced fast cars. But what Seki and his team are trying to do is build the passion and understanding of the origin of modern cars through flashbacks focused on legendary supercars and classic cars of yesteryear.

To come up with a menu of classics for each event, Seki told me that he conducts a questionnaire each year that asks potential event attendees what type of cars they would like to see. “The vast majority of those 50+ say they would really like to see their childhood dreams again and see classic supercars in the flesh,” Seki points out.

The organizers therefore strive every year to collect cars that arouse great interest among the largest number of participants. But to also arouse the interest of enthusiasts who want to buy a car, the organizers invite car manufacturers to exhibit their latest and greatest cars. This aspect of the event can often lead to one or two automakers launching all-new models in what they call a “world premiere.” For example, two years ago Mazda unveiled its all-new MX-30 mild-hybrid SUV, turning the Motor Council into a car show, hall and museum.

When I entered the lobby, the first booth that greeted me was truly rare. The Alvis Car Company of England had a large field presence with some 6 cars, all classics in their own right. Based in Coventry, Alvis started building cars from 1919 and closed in 1967. In 2017 the firm announced it would offer limited edition models like the 4.3-litre model, 72 years later. production of the latest model. Two of the highlights on the stand were the 1936 Bertelli Sports Saloon and the sleek 3.0-liter Graber Super Coupe, which the automaker still built in small numbers for prices reaching $500,000.

Revealing the depth of the Auto Council, Honda chose this show to celebrate the Civic’s 50th anniversary since the model was first sold in the United States. Having sold some 27 million units over five decades worldwide, making it one of the most popular entry-level runabouts in the world. , Honda celebrated by introducing a first-generation Civic as well as a “Yamato Civic” that raced in the 1970s.

The Mazda stand theme was a tribute to the brand’s long history and successes in motorsport, focusing on achievements such as winning the 1991 24 Hours of Le Mans in the 4-rotor 787B racing car. On display were legendary vehicles like the Cosmo Sport Marathon de la Route which placed fourth in the “84 Hours of Nurburgring Endurance Race” in 1968, as well as the Familia Rotary Coupe which won the race All-Japan Suzuka Automobile Grand Cup in 1969. Bridging the past with the present and the future, Mazda also introduced a world-first version of a bespoke MX-5 called the Mazda Spirit Racing Roadster, featuring a unique 4-tone livery and a huge rear wing.

Next door on the Porsche stand, the German company showcased historically significant models like the 911 Carrera RS 2.7 and 911SC as well as the latest all-electric Taycan Turbo S. On a nearby stand, another exhibitor reinforced the presence of Porsche with its rather special dark green. 356.

Next to Porsche was a tribute to the Nissan Z, with a 1970 Datsun 240Z, a 1982 Datsun 280Z, a 1989 300ZX and, once again, connecting these historic cars to the present, an all-new Nissan Z from 400 horsepower looking to the future of the sporting heritage of the Japanese brand. Z fans have Nissan USA’s first president, Yutaka Katayama, to thank, who in the late 1960s saw the potential for a beautifully designed, fast and reasonably priced sports car and forced his bosses to Nissan to return to Japan to greenlight production.

In front of the Nissan stand was a tribute to the famous German DTM racing series. Seki and other event organizers commented that this influential racing series is not well known in Japan, so they wanted to try and change that perception and increase its presence by displaying vehicle-based cars. production such as the BMW M3, Mercedes Benz 190E EVO II. and a race winner in the Alfa Romeo 155 V6 TI.

But without a doubt, the star attraction of this year’s show for me was the three Italian classics sitting in the middle of the room, and all penned by legendary Italian designer Marcello Gandini. Breathtakingly beautiful and looking more like works of art than sports cars, a bright orange Lamborghini Countach sat next to a dark red Lamborghini Miura, one of the coolest super cars desirable in the world and a classic that featured in the opening scene of the 1969 film “The Italian Job.” Then, on the other side of the Italian rostrum, was a shockingly green De Tomaso Pantera written by Gandini in 1971.

Facing Italian pedigrees was a collection of supercars that followed the theme of “classic and modern”, namely a 1975 Maserati Bora and an all-new mid-engined Maserati MC20 containing a 621-hp twin-turbo V6 and priced at around $216,000. As well as being gorgeous, the Bora is a car famed for having been penned by another legendary Italian designer, Giorgetto Giugiaro at Italdesign and it was the first Maserati to use 4-wheel independent suspension.

To be honest, it’s great to see manufacturers launching their new electrified cars like the McLaren Artura and Porsche Taycan, vehicles that inspire a new generation and address the planet’s need for CO2 reduction. But visitors to this show really came to take a trip down memory lane and see their favorite legendary cars, in the flesh, cars that adorned their walls as posters when they were teenagers. And what memories these are. So, what poster did you have on your wall?

Tetsuya’s new restaurant in Singapore opens with a twist