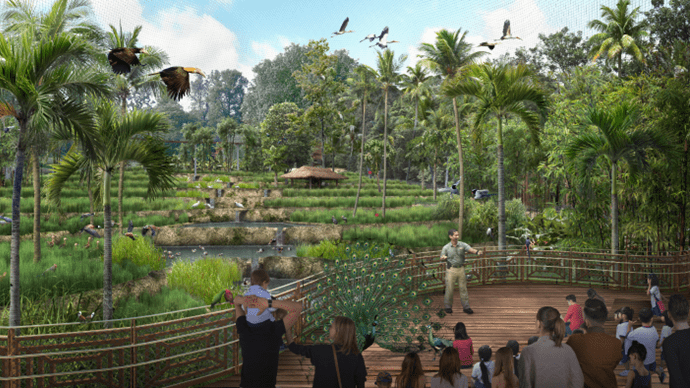 Scheduled to open in the second quarter of 2023, the 17-hectare (290-acre) bird paradise will be the first of new wildlife parks located in Mandai Wildlife Reserve to open to the public. Managed by Mandai Wildlife Group, Singapore’s new bird park, Bird Paradise, will transport visitors to a colorful world that will be home to 3,500 birds from over 400 avian species. Designed to encourage discovery at every turn, Bird Paradise will welcome visitors to immersive and naturalistic mixed-species habitats, where they will explore eight large aviaries that reflect different biomes of the world such as dense African rainforests, southern wetlands, American, Southeast Asian Rice Paddies, Australian Dry Eucalyptus Forests and more.

Mike Barclay, CEO of Mandai Wildlife Group, said: “When the Mandai rejuvenation project was considered, we wanted Bird Paradise to exemplify our commitment to operating open and immersive wildlife parks that put animal welfare at the centre. of what we do. We have designed Bird Paradise to offer customers a range of carefully themed and choreographed aviaries, which will bring visitors even closer to some of the world’s most amazing bird species. Support facilities are also of the highest standard, including a state-of-the-art avian hospital and extensive breeding facility. As an organization dedicated to the protection of wildlife, I am confident that Bird Paradise will provide us with the perfect platform to continue our education programs, our capacity building initiatives and our important work to protect wildlife species. endangered birds in the region.

A fascinating exploration through immersive habitats

A key highlight is the Heart of Africa where visitors will find themselves in the forested valleys of mainland Africa. With a high canopy experience, visitors will be led through dense, misty forest with meandering forest streams, where they can observe birds displaying their natural behaviors. A recreation of the peaceful bamboo forests and sloping rice terraces of Southeast Asia can be found at Wings of Asia. The landscaping serves more than just an aesthetic function, with the bamboo maze providing a major food source for the animals living in the habitat. The terraces also create a unique ecosystem for birds like the critically endangered Baer’s Pochard and the endangered milk stork.

At Penguin Cove, an indoor habitat will eventually house penguins such as Gentoo Penguin, King Penguin, Humboldt Penguin and Northern Rockhopper Penguin. It will offer guests a fascinating look at the ocean life of these birds.

Guided by the knowledge and experience gained from operating the 51-year-old Jurong Bird Parkthe new Bird Paradise will continue to preserve the heritage and legacy of the existing bird park and pay homage to Singapore’s pioneering wildlife park by retaining iconic elements such as the heliconia collection.

Some of the park’s most endangered species will be housed in the Winged Sanctuary, an area specially dedicated to birds of high conservation value, including critically endangered species such as the Philippine eagle, Vietnamese pheasant and Negros pigeon with a bleeding heart.

Throughout the park, educational programs and features such as touch and digital interactions, bird interactions and feeding sessions will allow visitors to engage in hands-on, interactive bird encounters. Beyond play, these elements also educate visitors and evoke deeper thinking about the real threats faced by animals in the wild, many of which face extinction unless steps are taken to conserve their animals. habitats.

Each area of ​​the park is designed to trigger the call to action for visitors to do their part for conservation. Transition zones between habitats double as educational spaces where visitors can learn about avian characteristics and behaviors. Fun and interactive elements will deepen visitors’ appreciation of the avian world, along with sensory explorations like human-sized nests and opportunities to recreate the dawn choruses of Southeast Asian songbirds.

Visitors can embark on meaningful guided behind-the-scenes tours of Bird Paradise’s fully equipped Avian Health and Research Center, Avian Nutrition Center as well as a Breeding and Research Center. Through these visits, they will learn about breeding programs as well as how to establish insurance colonies that protect species in the wild from extinction. They will be exposed to conservation research projects that help maintain and protect populations of species in the wild. A 2,000-seat amphitheater is also set to delight with free-flying demonstrations and refreshed presentations.

Jurong Bird Park is currently conducting its final flight, A Flight To Remember. After the last official day of operations of Jurong Bird Park on January 3, 2023, the process of relocating avian residents to Bird Paradise will begin.

With the new Singapore Bird Park opening next year, development work for the rest of the enclosure is also well underway. The remaining features are expected to roll out gradually through 2025.