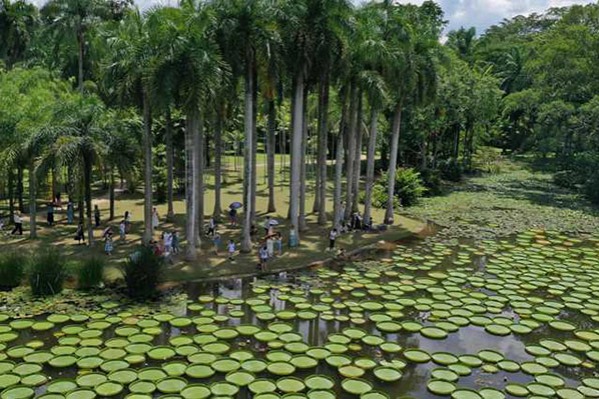 Tourist attractions across China are offering free entry to lure visitors as recent COVID-19 outbreaks in parts of the country are under control. The country’s recent removal of indication of travel through COVID-affected areas on a mobile app is expected to further boost domestic tourism.

To facilitate domestic travel, the Ministry of Industry and Information Technology announced on June 29 that the asterisk mark indicating that a person has been to an area with medium or high risk areas for COVID-19 in the previous 14 days would no longer appear on a digital travel history map used since the start of the pandemic in 2020.

Less than half an hour after the announcement, searches for air tickets on online travel platform Tongcheng Travel jumped 180 percent from the same time the previous day. Hotel searches jumped 220%.

Li Mingde, academic adviser at the Tourism Research Center of the Chinese Academy of Social Sciences, told China News Service that the move will “undoubtedly give a big boost” to the country’s tourism industry.

To entice people out, many tourist attractions, including some highly rated ones, have started offering free entry.

“The bustling Huashan Mountain is back,” Li, a 57-year-old local tourist goods seller, told Xi’an Daily. The famous attraction in Shaanxi province is rated 5A; the highest in the Chinese rating system for tourist attractions.

“I have seen a noticeable increase in the number of tourists since Huashan’s free entry policy came into effect. My business is much better now, which has renewed our hope for the tourism market,” said Li.

Huashan announced in May that it would offer free admission from June 1 to June 30, and daily visitor numbers would be capped at 15,000. On June 28, it announced that the policy would be extended until July 31.

From June 1 to June 25, the transportation service and ropeway service in the scenic area and enterprises at the foot of Huashan and in the city of Huayin, where the mountain is located, recorded a combined turnover of more than of 90 million yuan ($13.42 million). ), reported the Xi’an Daily.

An important way to ensure that the free admission policy makes financial sense is to promote spending on products and services other than tickets.

Zhangjiajie Grand Canyon, which offered free admission for a time last year, said it would continue to do so from May 11 to December 31.

Last year, the scenic area earned 10 million yuan from sources other than ticket sales during the two months it offered free admission. It was twice as much as usual, the tourist information site New Lvjie reported.

Wang Weiguo, marketing director of the Grand Canyon of Zhangjiajie, told New Lvjie that the scenic area has been steadily investing since the pandemic began in 2020. It has introduced secondary tourism resources such as jumping facilities. bungee, virtual reality experiences and climbing facilities.

As a result, the proportion of revenue from secondary resources has increased from 10% in 2019 to 30% this year.

Fang Zeqian, industry analyst at Ctrip, told Guangming Daily that offers such as free admission not only improve the attractiveness and competitiveness of tourist attractions, but also increase tourists’ spending on secondary resources such as transportation. and restaurants.

While free may promote intra-provincial travel, the offer seems less appealing to long-distance and inter-provincial tourists as they have to consider transportation, accommodation, food and time costs, Cao said.

“Promoting spending on tourism resources other than tickets can be an effective approach,” said Han Yuanjun, a researcher at the China Tourism Academy, as quoted by Guangming Daily.